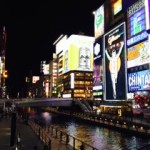 While it may not be apparent to short-time visitors, Tokyo and Osaka are very different cities with very different cultures. Tokyoites are known for being reserved, serious, polite, and tend to keep to themselves. Osakans are the opposite – gregarious folks sometimes bordering on raucous. Osaka is the home of many famous Japanese comedians, and the people there are known for their sense of humor. Locals in Osaka are far more likely to start a conversation with you than people in Tokyo.

The origin of this peculiarity traces back to the fact that samurai used to walk on the left side of the street, supposedly to be better able to draw their swords. During the Edo Period, Edo (present-day Tokyo) was the capital of the shogunate and the center of politics and was thus full of samurai and nobles. However, Osaka was always a business hub. As samurai traditionally abhorred commerce, and merchants were considered among the lowest classes in feudal Japan, there were relatively few warriors or nobles living there. Osakans naturally took to the right, and the custom stuck to this day.

PREVIOUS POSTS | How Shinto and Buddhism coexist in daily lives in Japan?

NEXT POSTS | Train etiquettes in Tokyo, what you are supposed NOT to do