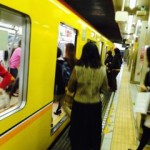 Japanese culture is well known for its rules and formality. Whether it’s table manners, business introductions, or after-hours drinking parties, there are unspoken rules for every situation. Riding on the train is no different! Let’s take a look at how the locals are supposed “not” to do.

No talking on the phone
The cardinal rule of Japanese train etiquette is to avoid talking on the phone while onboard. Many new to Japan may be shocked at just how quiet the public transportation is. The fact that the vast majority of passengers respect the phone rule is the major reason. Feel free to speak with your traveling companions, but don’t take or make calls while on board.

Don’t carry backpacks on your back
Japan, and Tokyo in particular, has the most crowded trains in the world. Due the cramped space, it’s easy to knock into other people if you carry your backpack on your back. Flip it around front when boarding the train for better spatial awareness. This etiquette would most applicable during commuter rush, between 7:30 -9:00 am.

Don’t rush to get on the train
While a constant loop of announcements plays over the station speakers in Japanese and admonishes locals not to rush to get on the train, these fall on deaf ears for those who don’t speak the language. This rule is the most commonly violated, but for safety’s sake, and to avoid delaying the train, don’t try to squeeze in the doors as they are closing.

etiquette and manners in Tokyo, how to get train in Tokyo, koi travel, unique experience