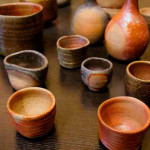 Bizen yaki, or Bizen ware is said to have originated in the 5th century, as sueki (or sue ware). It was then used by upper-class people. Only around the beginning of the 14th century did Bizen yaki become popular nationwide due to its robustness. The name is derived from the Bizen district where it was produced in huge quantities. One feature of Bizen yaki is that glaze is not applied and the color is derived from the chemical reaction of the clay and the fire in the kiln.
Became interested in Bizen ware? koi Travel offers you unique pottery experiences!

PREVIOUS POSTS | Bonsai is a way of appreciating nature

NEXT POSTS | Bizen ware represents the beauty of incompleteness, caused by nature