Sake is used in ceremonial occasions such as weddings. When I attended a friend’s wedding recently, kagami-biraki, which can be literally translated as “opening the mirror” was performed. It is a ritual whereby the bride and gloom break the wooden lid of a sake barrel together. The lid of the barrel is referred to as mirror because of its round and flat shape. By opening the lid, it is believed to bring good luck and prosperity to the couple. It is said that the ceremony originates from the time when sake barrel was opened to offer sake to samurai soldiers before battles.

With all the attendees watching, the newly-wed couple broke the lid together with a wooden stick and sake was offered to everyone. Needless to say, the taste of sake was superb and it was a wonderful way to celebrate the wedding.

During the ceremony, another important ritual of proposing toast was performed. The guest of honor was invited to give a speech and propose a toast by saying “kampai!” Kampai means emptying a glass and it is said not only in weddings but also when drinking with friends and colleagues. However, it is more than just emptying a glass; it is a way to bond with each other or pray for each other’s good luck. 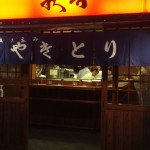 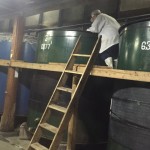 PREVIOUS POSTS | How to book a Michelin stared restaurant in Japan and what you should NOT do.