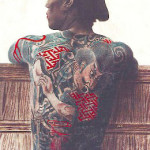 Tourists who are inked should be aware that, in general, Japan has a negative attitude about tattoos that make accessing certain facilities more challenging. Although tattoos are quite commonplace in most western countries, and are becoming popular with younger demographics here, many older Japanese view them as explicitly crime-related. Fans of Japanese cinema and video games will easily recognize the ornate, full-body tattoos worn by the Yakuza. Additionally, similar to the public shaming described in Nathaniel Hawthorne’s The Scarlet Letter, the Tokugawa Shogunate used to punish convicted criminals with forehead tattoos detailing their various offenses.

Although the public shaming of criminals in this way has been long since abandoned, tattoos are still very popular among members of Japan’s underworld. Japanese often view people who have them with suspicion or fear. The vast majority of Japanese realize there is a cultural difference between Japan and western countries, and are not uncomfortable if they see a non-Japanese person with tattoos. However, most gyms, bathhouses and hot springs explicitly bar them. Some have more lenient policies and allow guests to enter if they cover them entirely with bandages or compression clothing, but it is rare to find one that allows patrons to keep them exposed. However, if you have one and need to get in a work out, Gold’s Gym allows exposed tattoos up to 15cm.

NEXT POSTS | Types of Japanese garden